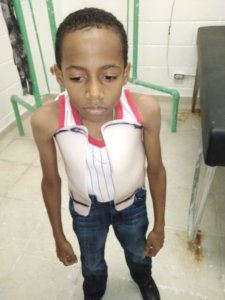 Last year Victor at age 9 received the first of three operations to correct his severe scoliosis. The doctors were pleased until he developed a serious infection. Displaying the same courage that he showed before the operation, Victor fought for his life and won. This little boy has his eyes set on a bright future filled with hope and promise.

Victor lives at Casa de Luz, which is home to 40 severely disabled children. Here they receive medical care, nutritious meals and a loving home. Victor is one of the lucky children. Thanks to All Children, which funded all three surgeries, Victor is able to attend a nearby school dressed in his uniform. He is one of just a few children with disabilities admitted to the school. Victor’s battle is far from over. He will need to wear a corset for the next six months to help support his back before receiving the final two surgeries.

We recently visited Victor to check on his progress and bought him new clothes as well as his first laptop. Each week Victor studies with a tutor to learn English and he can already greet you and count to 10. Someday he hopes to visit the United States and wants to become an engineer. All Children is incredibly proud of this remarkable young boy. Watch for future updates.